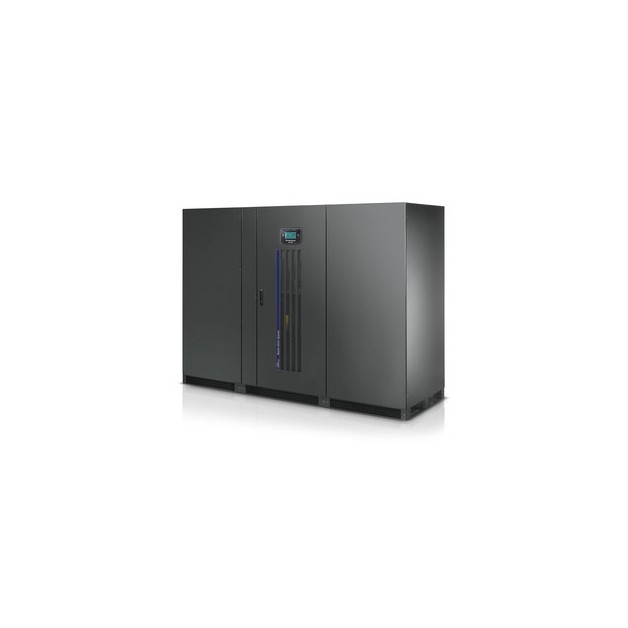 The centralised by-pass is an alternative to the distributed by-pass. Technically the two solutions fulfil the same purpose, i.e. to guarantee power continuity, but have different architectures.
Whilst it is true that distributed bypass solutions are the most common due to their flexibility of use and low initial cost, it is also true that in the medium/large data centre market centralised bypass solutions are preferable in terms of technical performance, footprint and sometimes cost, above all in large installations where the number and type of protections as well as system wiring have an impact.
The data centre and data-storage market in general is destined for large growth (in terms of percentages and volumes). It is therefore important to respond to the various requirements with flexible solutions that are able to adapt to the growing demands of the market in terms of the levels of power and performance required.

Enquire About This Product

The Riello UPS centralised by-pass (named MSB ) is available in four standard power ratings: 800, 1200, 2000 and 3000 kVA.
Intermediate solutions within this range can be made, as well as solutions greater than 3000 kVA based on the requirements of the customer or application.
The MSB centralised by-pass can be integrated with the Master MHT range; in fact it can be associated with up to 7 UPS modules in the range, obviously without static by-pass and associated by-pass line (named MHU ). Based on requirements, MSB can also be compatible with the MASTE R MPS range, thus ensuring complete flexibility aimed at satisfying all power and power supply requirements. Riello UPS provides the same flexibility as the Master HP for the battery bus, so that the MHU units can operate with both shared or separate batteries.

The 800 kVA MSB is supplied with a comprehensive cabinet including by-pass line input switch (SWBY ), system output switch (SWOUT ) and manual by-pass (SWMB ).
The 1200 kVA model is supplied as standard without any switches but can be equipped with the same, suitably proportioned, switches provided for the 800 kVA model (SWBY , SWOUT , SWMB ) The more powerful models are supplied with no switches; the bulky sizes of disconnection devices at these power levels are such as to favour tailor-made engineering solutions as an additional part of the system attestation and distribution cabinets where the centralised by-pass and MHU modules are fitted.

Medium-high power systems are often comprised of N UPS of small-medium power ratings arranged in parallel. It is clear that the larger the size of the individual UPS modules or the number of units configured in parallel, the more complex and extensive the system wiring shall be. Particular attention should be paid to the length of the power lines for the individual UPS bypasses, so that they are equidistant from the common points. Even minimal variations in the line impedances of the individual by-passes can cause current equipartition problems between the UPS and associated overcurrent in the cables whenever they supply from the by-pass. This can lead to the inappropriate cut-in of protection devices and  an generate heat, with the end result of minimising power continuity and increasing power consumption for cooling the system. The Riello UPS centralised by-pass (MSB ) is the ideal solution for eliminating all critical issues connected with power distribution over by-pass lines. When activated, all power flows through a single static by-pass module, ensuring:

with regards to accessibility to system information and with regards to manoeuvrability from the moment the system is equipped with a single manual system by-pass.
By opting for the solution with a centralised by-pass, the individual MHU units are provided without integrated static bypasses, thus eliminating critical components (static circuit and associated line protections such as disconnectors and/or fuses). This translates into a lower installation cost
by eliminating the cables for the auxiliary power supply lines to the individual modules.
These advantages grow exponentially as the power levels at play and number of modules increase. This is why the centralised by-pass solution is technically and economically preferable for power levels above one megawatt.

When compared to a solution with a distributed by-pass and a considerable number of UPS modules arranged in parallel (more than 4), the MSB solution significantly reduces the amount of components (SCR, switches, control elements for individual static by-passes, coupling inductances),
consequently increasing system reliability.

Recent design philosophies for data centres are pushing towards making systems operate on by-pass lines not only in the event of an emergency, but as an alternative to “ON-Line” mode, thus improving system efficiency. For this reason power circulation through a single line (centralised bypass), eliminates all problems connected with current distribution, which must be ensured in the event of the operation of UPS modules in parallel with distributed by-passes. The greater the power rating of the UPS the exponentially greater the risk of minimal impedance differences in the by-pass lines generating large imbalances in current circulation, with a serious risk of protection cut-in, compromising power supply continuity. With the centralised by-pass the static circuit is single and independent and the current flows through a single channel, ensuring immunity from The static bypass is a support device aimed at ensuring power continuity in the event of inverter failure. In the event of N UPS configured in parallel the failure of a single inverter module should automatically exclude it from the parallel system, ensuring the correct operation of the other units and the reliability of the system.
For this reason automatic switching to by-pass lines takes place only when there is a serious fault with the inverters or due to external forces, such as a short circuit downstream of the system.
These events are both rapid and unpredictable and, based on the power available on the line, can generate short circuit currents that can be  xtremely high. In the event of distributed parallel configurations where N static bypasses are arranged in parallel, minimal differences (even in the order of fractions of a millisecond), can generate uncontrolled transients and current flow between UPS units such as to trigger protection devices or even damage the by-pass thyristors. Riello UPS are equipped with sophisticated parallel control logics that ensure synchronism between the various units arranged in parallel under all operating conditions. The Riello MSB centralised bypass in any case ensures complete immunity from any problem connected with switching synchronism between modules even in the most extreme cases as long as the static module is single and independent.

In addition, differently from a distributed parallel configuration of the same power rating, the centralised by-pass can be oversized to guarantee increased overload capacity and the ability to withstand short circuits.
The ventilation system for the MSB static by-pass is designed to guarantee operation even in the event of the failure of several fans. In order to constantly monitor the status of the fans, a control circuit can be provided to control the operation of each individual ventilation fan.